Grillshack is a new US style diner which comes to Soho with a technological twist. In addition to ordering at a till, Londoners can now order at a touch screen or even from their seat via an app on their tablet or phone.

Grillshack occupies the former site of Alphabet Bar in Beak Street, the heart of Soho. This road is popular with restaurants and is already home to popular heavyweights like ‘Polpo‘ and relative newbies like ‘Flatiron‘ Steak.

Fortunately very dated and drab looking Alphabet Bar decor is now gone. They have even managed to remove the horrid damp smell that plagued the former tenants… (which probably hastened their demise). Gone is the dark basement feel and in comes a bright lively US diner.

The entire rear of the venue has been turned into a kitchen/dispense bar area. Banquette seating wraps around half of the venue providing home most of the two seater tables. For larger parties there is a large table of 10 near the kitchen and sensibly many of the 2 seaters can be pushed together. I’m told that there is space for 90 covers in total. Indeed there are approx 65 covers upstairs and I see space for approx 20 in the more intimate downstairs seating area.

Grillshack have spent a lot of effort to provide 21st century ordering technology to the US diner concept. Apart from ordering from the counter, you can walk up to a touchscreen to order and pay without interacting with anyone. Possibly a bonus for those with a hangover.

For those who have embraced wireless technology you can download the iPhone or Android ‘Grillshack App’. This allows anyone to order, whether you’re in the restaurant or not! As expected for a ‘connected’ restaurant, they have free wifi to encourage you to play with their ordering gadget. I downloaded the app on my iPad and I can confirm that you would have to be a serious technophobe to mess up. The screen is set up with huge “Fisher Price” sized buttons which you can’t miss. The software is very responsive, it didn’t crash or hang even with furious stabbing at the buttons in a deliberate attempt to create an error.

A nice piece of software, the only addition I would like to see is some pictures of what you’re ordering. However, that would probably slow down the app and annoy anyone trying to order on a slow connection.

The beer is brewed by South African craft brewery Brewers & Union. Not a household name in the UK, but think of them as South Africa’s answer to Brewdog. I’ve been told that this is a special recipe for Grillshack, in any case it is a nice, light refreshing beer.

The french fries were fantastic. A little spiced and extremely crispy on the outside. Grilled corn came split into two mini cobs well doused with a light sauce with a topping of grated cheese and salt.

Cheeseburger was cooked medium (There wasn’t an option on the touch screen system to ask for medium rare). The patty itself was 4 Oz and well covered in melted cheese and topped with a large slice of beef tomato. The bun is a very light brioche with much of the flavour and texture dominated by the bacon. It is a perfectly good burger but there are so many great burger specialists in Soho and the West End I would probably head elsewhere if I ‘just have a burger craving’.

The ‘Ice Cream Sandwich’ is in fact two ‘American-style’ soft triple chocolate chip cookies sandwiching a layer of vanilla ice cream. If you’re a lover of sweet stuff this is definitely a dessert for you as it’s very rich… Several hours later I’m still feeling the sugar rush. Oddly, it is delivered in a recyclable paper bag on a plate. Maybe it’s designed to be eaten as you leave?

Grillshack is an interesting concept, “US diner meets modern ordering technology”. The multiple different ways to order was rather confusing at first but I can now see it’s excellent if you want to pre-order lunch to take-out or just want to avoid talking to a cheery waitress/waiter.

‘Grillshack is a quick all day counter service grill opening on Beak Street on 4th September. Eat in and take out will be available early till late, seven days a week’. 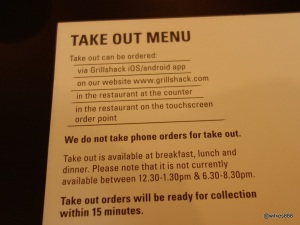 The food is the ‘US Diner’ staple of burgers, steaks and chicken. Good for a pit stop in the West End and great if you’re in a hurry and want to pick something up fast. Their menu even states “Take out orders will be ready for collection within 15 minutes”. If they can keep up with that promise I’m sure they’ll have a very happy local following.

NOTE: Many thanks to CODE Consultancy and Grillshack for their invitation and their hospitality. 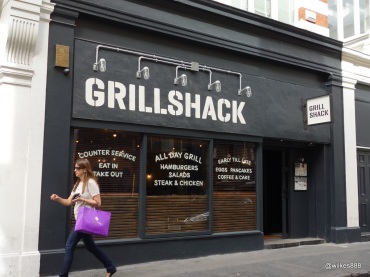 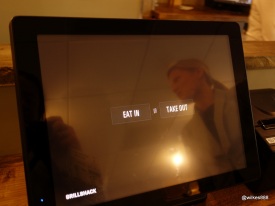 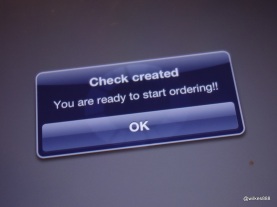 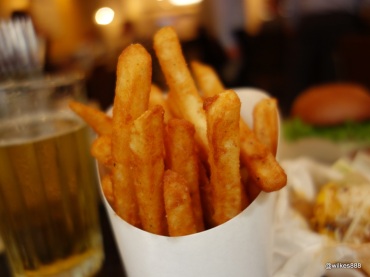