Burger Away Day is self described as a “social gathering for hardcore burger lovers”. This crew of burger-philes convene at a different venue each time to enjoy a bespoke burger dinner created by a London chef. This time the hosts is The Dissenting Academy Pub in Stoke Newington with produce supplied by The Cornish Project

#BAD7 is the seventh Burger Away Day event created and run by food fan and screenwriter Camilla Castree. Previous events have collaborated with Chef Carl Clark of ‘Disco Bistro’, Lucky Chip, Elliot’s Cafe Summer Pop Up, Roti Chai, Breddos Tacos and Meat Mission. It looks there are future plans to expanding the “Away Day” concept to include ribs. Look out for #RAD (Rib Away Day) later in the year.

The venue for the evening is the Dissenting Academy Pub which is the home to Chef Jimbo Thomlinson who commands the kitchen using produce supplied by The Cornish Grill, a project to create out of season jobs for those in Cornwall by supplying fresh produce from the region to restaurants in and around London.

Venues like The Dissenting Academy are the epitome of why you should look outside the traditional high profile restaurant launches for excellent dining ideas. Previous events have include dinner banquets with diet and nutrition specialist ‘Gourmet Focus’ and it’s antithesis, the self explanatory “Gout Night”. Although I missed ‘Gout Night’ I did attend the Gourmet Focus event which was fantastic value at £25 a head. They also have a great Sunday Lunch for carnivores with rump barrel and the saddleback pork loin (above)

London is full of good ideas set up by food fans. There are countless great supperclubs which focus on specific cuisines, however a ‘roaming’ supper club with a different chefs each time is a different spin on the concept. 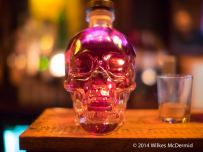 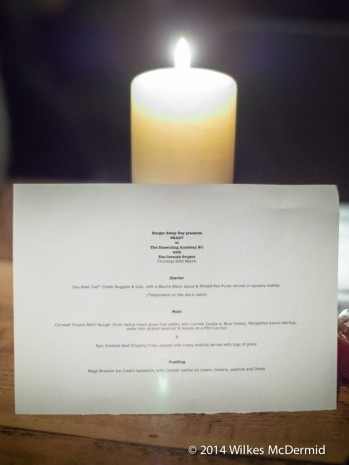 The menu for tonight…

Trust me… I’m wearing a tie…

Under the nose of Bill Hicks 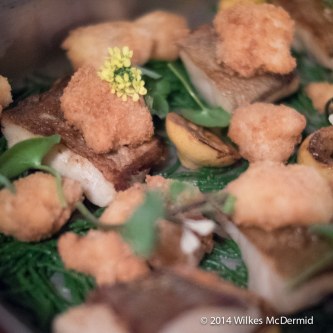 Cod Loin & Nuggets on a bed of samphire and lemon

All about “The Cornwall Project” and “London Mess” 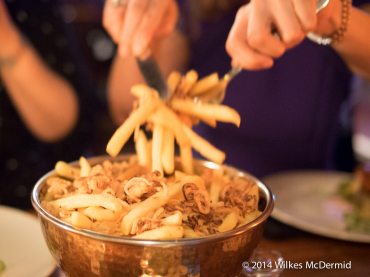 Dessert free for all…

Someone’s looking very pleased with herself… 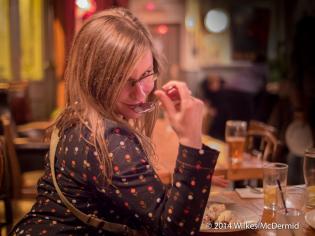 ← 10,000 calorie burger within a burger is now a thing
FIRST LOOK: @DirtyBonesLDN Cuisine from South of the Mason-Dixon Line, with a Kensington twist (30 Pics) →