More ramen! It looks like ramen fans will be soon spoilt for choice as international Japanese ramen specialist ‘Ippudo’ will be open their doors on Fri 10th Oct in Central St Giles.

It was almost two years ago in 2012 when I reported that Bone Daddies Ramen Bar, would be opened by Chef Ross Shonhan who took great pride in telling me that he would make his own tonkotsu bone broth in house. Back then it was a novelty that anyone would go to the effort of boiling down pork bones to create the rich authentic Japanese soup. The only competition to speak of was Tonkotsu a few minutes walk away.

Two years later in 2014 there are multiple ramen noodle venues all vying for your attention. Most recently Kanada Ya who opened a few weeks ago in St Giles High Street with a lovely creamy broth complete with a chaushu pork collar.

Ippudo is due to open next week on Fri 10th October, directly opposite Kanada Ya and well within walking distance of the three most talked about ramen competitors, Bone Daddies, Tonkotsu and Shoryu Ramen.

“Founded in Japan in 1985, Japanese ramen specialist Ippudo is to open its flagship European restaurant in London this October. Located in Central St Giles, Ippudo will offer Londoners many of the same signature dishes that has seen it become one of the most popular ramen restaurants in Japan as well as in Sydney, Singapore, Hong Kong and Manhattan, where ramen-hungry New Yorkers regularly queue around the block for a table.”

The 80 cover Ippudo restaurant will be split between a ground floor and mezzanine level, have a no reservations policy. The sample ramen offerings look solid with an indicative price of £10-12 placing them in line with most of their competitors.

This will be Ippudo’s first restaurant in Europe. On paper, Ippudo is a chain restaurant with 120 sites in over 13 countries which is a little off-putting. However they appear to be very popular in New York and a well known London based American chef assures me that their ramen is in fact excellent. So those with an default aversion to chain eateries (myself included) may be wise to hold their judgment until they open. 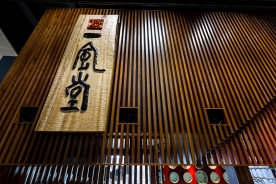