Posted by Boozedude on November 19, 2014 in Eating, London Life, News 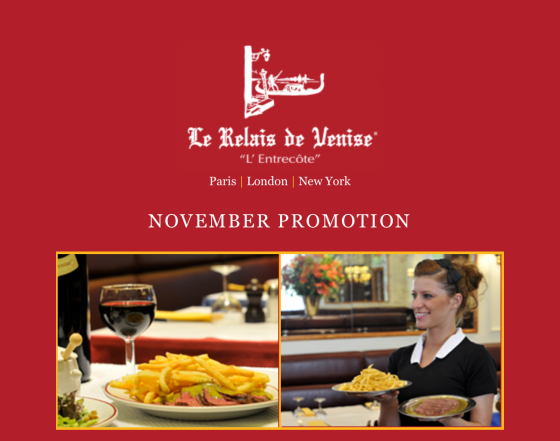 In the days before Burger & Lobster and Flatiron Steak, the concept of visiting a restaurant devoid of choice was completely alien to many Londoners and a quirk of the French steak venue Le Relais de Venise, known to many as L’Entrecôte.

I first encountered Relais de Venise / L’Entrecôte on a business trip in the early 2000’s in Paris. As I recall you could choose how you would like your steak done… but that was it… steak or nothing! Nowadays Flatiron Steak has a similar ethos. Although there are actually ten items on their main menu, five are sides and four are sauces to complement the single main course – steak. Burger & Lobster have a relatively dizzying assortment of three mains – a burger, a lobster, or a lobster roll, all for £20.

L’Entrecôte opened their first venue (under licence) in Marylebone. I visited this London outpost along with some ex-pat Parisian fans in the London but it was over half a decade ago! Since then, the UK licensee has opened a further two branches – One near Bank Station in The City and the other in The Docklands.

For anyone wanting to try the precursor to the no-booking, limited-choice venues of today, L’Entrecôte Canary Wharf is offering ‘25% OFF your total bill’ from 19th-30th November (Note to Oenophiles: sadly the fine print states ‘House red and white wine only’).

HOW TO CLAIM:
“Print off this voucher and bring it with you to get your 25% off”