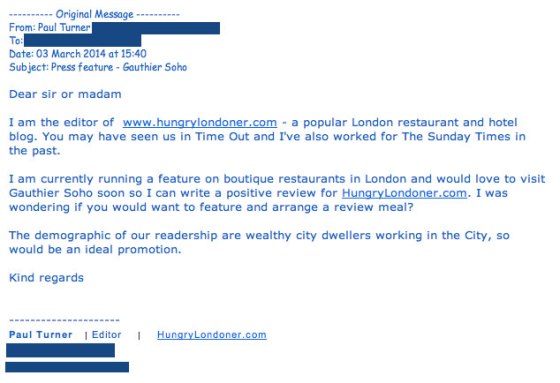 For those of you unaware there were two incidents on Twitter. The first is #BlaggerGate between Soho restaurant ‘Gauthier’ and blogger ‘Hungry Londoner’ who effectively requested a free meal in exchange for a ‘positive review’. The second is #BloggerGate which started between Observer Food Critic, Jay Rayner, and Samphire & Salsify who was dismissed as an “effin’ blogger” after a row erupted over the validity of reviews from a complimentary meal.

A screenshot of an email from ‘Hungry Londoner’ to ‘Gauthier’ was tweeted by James Lewis, the Creative Director of the Gauthier Soho Group. In the email he solicits a “review meal” in exchange for a “positive review”. (Image at the top of the page) 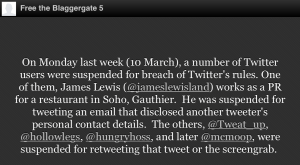 The aftermath is the suspension of four Twitter accounts on Mon 10th March and the self termination of Twitter account and blog of ‘Hungry Londoner’. The account of @JamesLewisLand is suspended for breaching rules on public dissemination of @HungryLondoner1‘s email and mobile telephone number. The accounts @Hollowlegs, @Tweat_Up, @HungryHoss are all speculated to have been suspended for retweeting the original tweet and the the account of @McMoop was subsequently suspended for tweeting a screen shot of the original image.

Interestingly, the email (although not the phone number) was alleged to be public information anyway from Hungry Londoner’s (now deleted) website, as noted by blogger Chris Pople.

@thecocktailgeek @hollowlegs @jameslewisland Private details as in the email address he has published on his blog??

Interesting that Twitter’s policies on the account suspension and breach of rules don’t appear to be applied uniformly as Storify user Anya Palmer has pointed out in “Free the Blaggergate 5, Why a bunch of food-lovers were suspended from Twitter, and why you should care”

NOTE:Hungry Londoner is on the now deleted twitter account @HungryLondoner1 NOT @HungryLondoner which appears to be unrelated and dormant since Jun 2012

I feel some (albeit unintentional) responsibility for this. I originally asked for opinions on the unusual street food concept in a five star park lane hotel “Lanes of London”. The ensuing thread erupted into a battle between Jay Rayner and Samphire & Salsify over the validity of reviews which are paid for by a restaurant.

Whichever side of the fence you sit, the argument which Jay Rayner offers is a valid concern. There is obviously a question over impartiality when a restaurant offers a complimentary (‘comp’ed’) meal to anyone. Since food journalists’ meals are generally paid for by their employer, not the restaurant, surely the viewpoint of the journalist is independent? Well maybe.

As many of you are aware, new venues often hold “press launches” or “launch parties”. I am regularly invited to these events, however I also see well known food-critics in attendance. They may not receive a ‘free meal’ directly from the restaurant, but they have received something free from the restaurant, usually in the form of canapés and plenty of champagne cocktails.

Also, as many have pointed out in the aftermath of ‘Blaggergate’. There have been questions over journalists taking freebies in the form of holidays or even requesting payments.

Remember last week everybody when we were talking media freebies? Here's one: http://t.co/k8DZytXkpw Why are bloggers different to media? 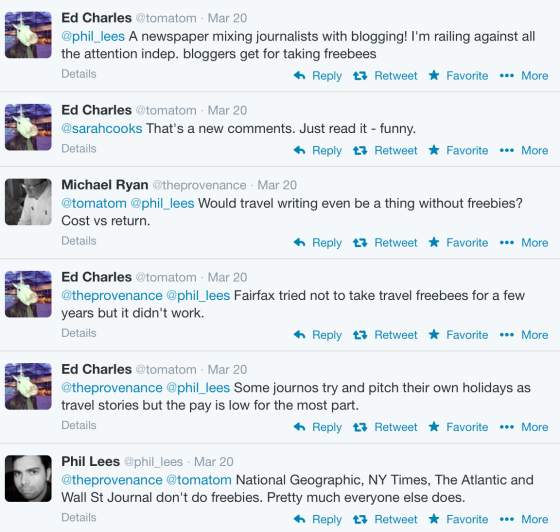 “Would travel writing even be a thing without freebies? Cost vs return.”

So am I asserting that neither restaurant critics nor food bloggers can’t be trusted because they both receive freebies? No, I assert that the output of anyone, professional critic or part-time blogger should be analysed in context and consider the integrity of the creator and the publisher. Since the ‘scandal’ of Hungry London’s post I have been sent examples of his mass mailings. Conversely it has been publicly alleged on twitter that a newspaper journalist has recently sent very similar requests.

@chrispople one of those super ethical real food writers who frown on bloggers?

Press: don't get too far up yr high horse re #blaggergate, remember when ES was caught publicly soliciting freebies http://t.co/tEAlXFm7aC

To be truly impartial you have to be free from any constraints. Do I think that professional publications are impervious to outside influences? No, most newspapers and magazines are commercial organisations with profit and at least survival objectives. In my experience from former careers, I have encountered numerous examples where the winners of a magazine’s ‘Annual Awards’ are rotated through the group of largest spending advertisers with the publication and have seen ‘withdrawal of advertising’ used on multiple occasions as an extremely effective final lever to ‘amend’ product reviews and assert editorial control.

A very public example of this was the Diagio vs Brewdog scandal. Brewdog were due to receive “Bar Operator of the Year” award from the British Institute of Innkeeping. However, Diagio “… which happened to be the awards’ main sponsor, found out just before the ceremony and demanded it be given the award instead” (Source: Huffington Post)

A public apology from the BII, reprinted on Brewdog’s website stated. 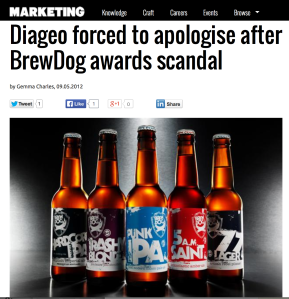 “Diageo (the main sponsor) approached us at the start of the meal and said under no circumstances could the award be given to BrewDog. They said if this happened they would pull their sponsorship from all future BII events and their representatives would not present any of the awards on the evening.

We were as gobsmacked as you by Diageo’s behaviour. We made the wrong decision under extreme pressure. We should have stuck to our guns and gave the award to BrewDog.”

Remember The Blaggergate 5 article above? Well, according to the author, it appears that a twitter account of Guy Adams, Daily Mail Journalist, was suspended during the London Olympics due to vocal criticism of US Broadcasting Channel NBC. Although twitter claim they do not monitor accounts, it is alleged that they actually alerted NBC of Guy Adams’ twitter rant before a complaint was levied. The obvious question is… how much advertising revenue did Twitter receive from NBC last year? We wouldn’t want to upset a major advertiser would we Twitter?

So is money the only influencing factor in this debate? No, not at all. For example Bill Gates may be the richest men in the world. However if he suddenly announced US political ambitions, those with lesser wealth but more political capital would be able to exert considerable influence over him. (Note that I have worked for one of the most wealthiest men in America followed his progress when he entered the world of politics.)

WHO GETS A REPRESENTATIVE DINING EXPERIENCE?

The purpose of a restaurant review is to gain a representative dining experience that any member of the public would expect to receive.

I agree that someone who has been invited to dine at a venue will undoubtably receive preferential treatment, as one would expect. However, with one notable exception, most top tier newspaper restaurant reviewers are instantly recognisable. When a known critic walks into a venue does one really believe that they get the same attention to detail as a regular diner? If the goal of a review is to give a ‘representative dining experience’ is that experienced not inherently ‘biased’ too?

I am aware of multiple venues who have a list of pseudonyms held by restaurant booking staff with a cross reference to the critic names so the technique of using a ‘nom de plume’ in the bookings computer is by no means failsafe. I even know one venue who drilled their staff to memorise this list.

For true anonymity I do applaud the mysterious Guardian Food Critic, Marina O’Loughlin who is regarded to be anonymous. (Although, there are a few reports that she is now known by a small number of restaurateurs).

WHO IS THE IDEAL RESTAURANT CRITIC?

If true impartiality is the true goal, the ideal restaurant critic should not only be completely anonymous but their publishing platform should also be completely free from commercial pressures such as threat to advertising spend. Therefore, for me the ideal critic would be a self funded multi-millionaire. However, this is not foolproof, if this theoretical multi-millionaire prides themselves in bringing ‘breaking news’ to their readers, withholding information, even in a passive-aggressive style could now be used as a lever, implicitly or explicitly.

Additionally, a representative dining experience is difficult to garner from a single visit. Anyone who has studied science knows that you must have multiple samples to come to a conclusion. Probably for obvious practical reasons of time and expense, I don’t see many reviews from blogger or paid critic which include more than two visits and the vast majority are written on a single visit. The only person I’ve seen who has a rule of multiple visits on different days and times of day is a cocktail bar and gin reviewer Gin Monkey who claims “Independent, Impartial Cocktail Bar Reviewes” by visiting a venue at least 3 times before making a verdict. However she recognises there are significant downsides to her approach, in addition to the cost, she recognises that her ‘new venue policy’ of waiting “3-6 months to settle into service” costs The Gin Monkey blog “potential Google & click throughs on new openings”.

SO WHO CAN YOU TRUST?

Use common sense people. If you’re researching a restaurant compare it against multiple sources. Think what is being written and why, read between the lines. For a (hypothetical) example, if a venue is marketed as a wine specialist on their website but not a single review mentions the wine list, ask yourself why.

Treat any sources of information like you would treat a newspaper. Align yourself with publications or writers who have similar views to yourself. Just like the Daily Mail reader probably wouldn’t touch the The Guardian.

Sometimes I am called a ‘cynical bastard’, however it’s all about using your head. No one lives in a vacuum and I don’t believe anyone is totally beyond influence, regardless of who they are or what they do… it is all a matter of degree

RAYNER DISCLAIMER:
I hereby thank Joe & The Juice, Brewer Street, Soho for the kind use of their space as a customer and the complimentary electricity, (coffee was paid from my own pocket) and thanks to WordPress for the free use of their publishing platform.

I use the ethos of disclosure at the end of my features so that any readers know if I have paid for the meal/drinks etc. I have never taken a payment to review a venue. I have not taken any payment from any blogger or journalist to write this piece.