Rosa’s is a popular Thai Cafe with branches in Soho, Spitalfields and Westfield Stratford. This is their fourth venue which takes over former Thai restaurant Mangsteen, opposite Mother Mash on Ganton Street, just off Carnaby Street.

Rosa’s Thai Café is exactly what it claims. A café serving Thai food, already popular with East Londoners who flock to their first venue in Hanbury Street, Spitalfields, often full both for lunch and dinner.

Rosa’s Carnaby – One large table of seven in the window, most tables are twos and fours

The restaurant sits on the site of ‘Mangosteen’, a restaurant of which I’ve heard positive feedback but never visited. One of the staff explains to a disappointed woman that “The owners went back to Thailand”. (Note: The woman and her friends still stayed for lunch.)

The decor is quite bright with light wooden accents, rounds lights and a few flowers decorating the tables. I counted 42 seats plus 3 stools at the tiny bar near the front of the venue. A banquette runs across left hand side of the venue forming half the seats for the four tables of four. There is one large table of seven near the front and two tables of six near the back. Most of the large tables can be split into tables for two. 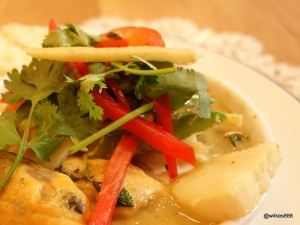 If you have eaten at Rosa’s before, it is exactly what you expect. If not, think of a English Cafe, then make the food Thai and you won’t go far wrong. The food is filling and well seasoned. The presentation is nowhere near the standard for say ‘Begging Bowl’ but it doesn’t compete in the same category.

The ‘Thai Calamari’ was presented as eight large pieces with raw carrot sticks carved into fierce looking spears, a sweet dipping sauce, fresh julienned carrots and cabbage with fried onion, peppers and a touch of Thai basil. Nice to have some fresh and dried vegetables but I do actually prefer the Thai Calamari at soho neighbour Cha Cha Moon (replicated from the Busaba Eathai menu)

‘Thai Green Curry with Seafood’ was a well balanced dish with a nice spiciness. The small bowl was a decent portion for £9.50 which included mussels, sliced scallops, squid but surprisingly no pea aubergine. It comes complete with brown rice, although the seafood itself seemed to be more firmly cooked than I would like it was still damn tasty.

Rosa’s fits a little niche of café and Thai. Recommended for people who just want some no-nonsense Thai food without the fancy ‘Cha Cha Moon’ decor next door. The only negative comment is that £3 for tea seems a little steep and out of line with the cost of the rest of the meal. However, given their loyal fan base, excellent location, people looking for Mangosteen and the potential spill over from other nearby Thai-like competition. I expect them to do well.

Rosa’s Carnaby – One large table of seven in the window, most tables are twos and fours 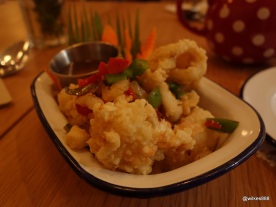 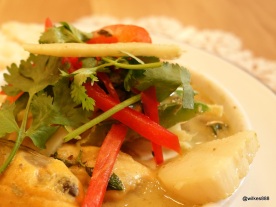 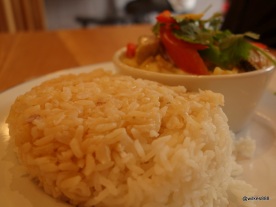